I blame my habit of trying to do too much at one go for the fact that I ended up at the Dr's surgery first thing this morning. For the last week I have felt very unwell in the evenings and not slept much at night. I have a temporary job in a local town, and am still doing the usual house stuff. Last night, whilst making a rather nice chicken chilli and peanut stir fry, I decided to tackle some weeds! As the pot simmered, I headed out to the borders directly opposite our kitchen window. I got the gloves, a supermarket carrier bag, and filled it to the brim as the pot simmered. It looks great, but it probably wasn't such a great idea on not much sleep.

The previous week I had done something similar with raking leaves along the long driveway.

I think I've invented something new; "Speed Weeding", kind of like "Speed Dating" but different........actually, they may not be that dissimilar!

And on a totally different topic. I gained a new friend on our trip to the UK. We had been having lunch at a country hotel with friends, when we realised the annual summer fair was taking place on the village green. By the time our meal was over, the stall holders were packing up and going home. I noticed a tombola stall still with a number of prizes left. The fundraising was for the local hospice, so I decided to buy lots of tickets. What really caught my eye on the table was a delightful knitted Peter Rabbit. I was determined to win him. I did win a prize, a salad spinner. Seeing my look of disappointment, the lady on the stall swopped the winning numbers and gave me the rabbit! I don't think I've been so excited about a prize before. And better still, the lady who knit him was sat behind the stall! So, Jean Copeland, I just want you to know that he is happily installed at Coneysthorpe, keeping our local bunnies in order! 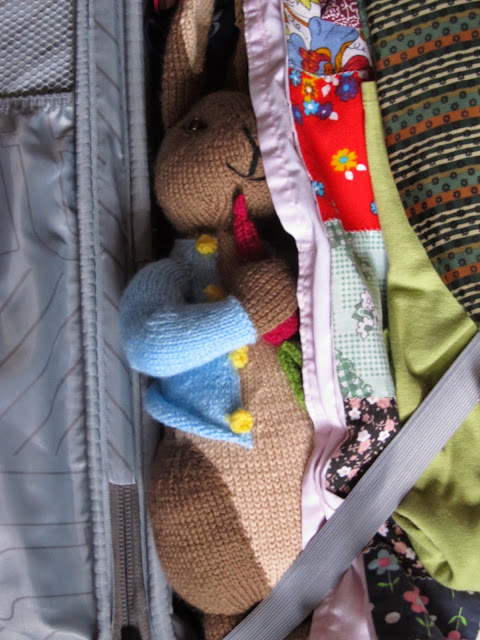