This morning I had occasion to use the guest bathroom/laundry (aka Mango's room). He loves to sit on the sink and watch birds out of the window. He also has a secret passion for clothes pegs, which can be found on top of the washing machine (which also has a bird viewing platform behind it). So this morning when I heard scratching and a thud, thud, I realised I was going to have to get out of the shower quickly before he sourced a battering ram to access his play room.

I'd closed the door, but could hear the handle rattling. Now, the ginger is tall when he stands on his hind legs, but I'd never seen him try to turn door handles before.

When I finally dried myself and dressed I was ready to see what mayhem had ensued on the other side of the door.

Big boy had climbed a bookshelf next to the door and was busy peering at birds in the paddock through the hall window. He had tried the handle, but as it is a round knob rather than the push down variety, he'd given up and decided to make himself comfortable on the books. He had picked a row of theology books which wobbled because several had been removed from the top shelf. By the time he had greeted me with a head bump, his back legs were crammed between a book on Talmud and another on the Tabernacle.

Alas, I doubt he will ever be a student of any lofty subjects, let alone a theologian, but in the affection and silliness disciplines, he has no equal. 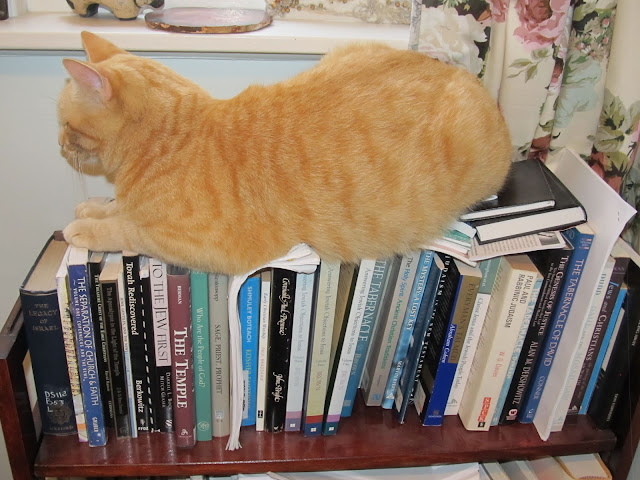