I am alone in the house today, and one thing lead to another and I ended up rearranging parts of three areas in our home. It started with making space for a narrow table we bought as part of the "styling" of our now sold house in town. When we bought it, we thought it would look nice in our hallway, but we had forgotten about the carpet runner. This carpet makes a daily attempt to wriggle out of our front door. The table would have to balance partly on wooden floorboards, and partly on the "I want to break free" runner. It wasn't going to work. It looked rather nice in our front spare bedroom, when I removed a large Danish coffee table, purchased during my time in Dubai. Said coffee table didn't fit anywhere except the office, and to put it in there involved moving my computer station, swopping tables and dismantling a round table which my computer had stood on (still with me?). This round table is sturdy and attractive, but there was nowhere to put it except the corridor near our second bathroom. This involved moving a very heavy ottoman. It doesn't look right there, but will have to stay until we decide what to do with it.

After all this moving, vacuuming, tidying papers, chucking out and straightening up, I was in need of a sit down. BUT just as I made my way to the office to flop into a chair, I spotted two rabbits running across the lawn into the paddock. I grabbed my camera and followed them, but was too slow. They High Fluffy Tailed it into the pampas grass.

On the way back from this missed opportunity, I took this photo. A moment of tranquility in the midst of a muscle numbing day. Oh, I forgot, I now need to remove three loads of laundry from the line. 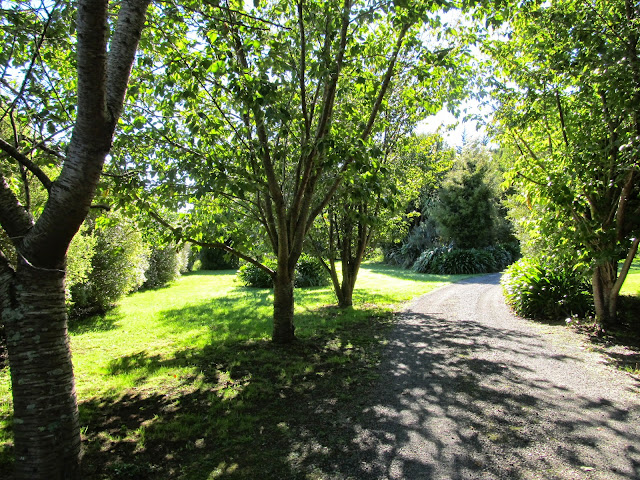