Today has been a "bit of a day" at Coneysthorpe. We waved off some visitors this morning, then had a series of "incidents" which caused our feline family to run for cover.

The first was two large dogs running through our garden. We have neighbours with dogs, but these weren't theirs and they were huge. Exit cats stage right as I shooed the dogs out of the garden (I was scared to put it mildly, one could have been the Hound of the Baskervilles). The second event was the arrival of a pew which we have bought for one of our verandas. Its installation involved a trailer being driven onto the lawn. The third visitor was a neighbour with his Leyland tractor. He had kindly offered to remove some vegetable beds which had been installed with wooden surrounds. The wood wasn't the right kind and it was in the wrong place for us. We also needed a shed uprooting. One cat has still to emerge from under the house after all the banging and clashing.
The turned soil where the veggie garden used to be has been used four times as "facilities" by the moggies. The pew was also being quality tested later by Ms Ginger, who jumped off the sunny cushion the minute I arrived with my camera. 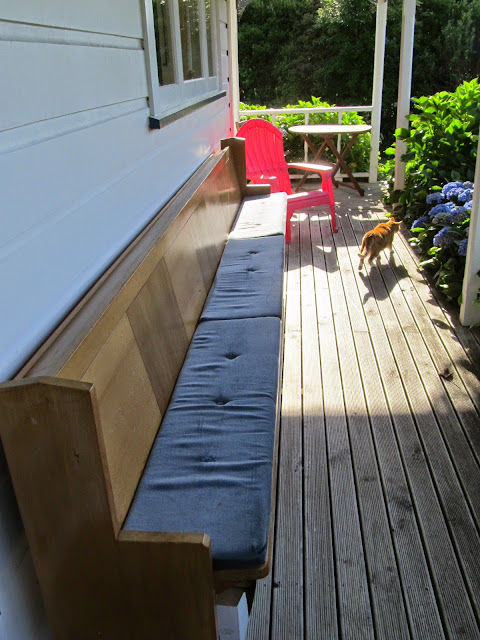 Oh and the title of this post refers to a TV programme called Trumpton - a delightful stop motion children's series in the 1960s
Posted by Jane at 23:34