I have come to a place when I can finally tell a story. It is the story of my great grandmother's sister Jane Ann, or Jenny.

When my dad died, I took on the mantle of family researcher. Dad was a natural historian and story teller, and perhaps if the world had been different for him, he could have written down the stories. But instead he collated lots of photos and documents meticulously in folders, and we worked together on mysteries of the family tree, me in one country, him in another.

He periodically mentioned Jenny and her two sons, Charles and Arthur, whom he could not get any further information for beyond the last available Census of 1911.

So after Dad died, I found myself digging, in his memory. What happened to them, and was I genuinely the last of this family line, being an only child with no children of my own?

Like many who investigate their long deceased relatives, information often comes in waves, sometimes a piece of flotsam on the beach leads to revelations of joy and sorrow. In Jenny's case, it was mostly the latter.

Through a group of genealogists on Facebook who gave their experienced help gratis, I discovered that Jenny had four daughters in addition to Charles and Arthur (Dad didn't know this). Three had been born and died between the Censuses. Almost by accident I uncovered a census entry for the second daughter, living far away from either her mother or father's family. It transpired that she had been put into the care of Barnados foster families for several years then returned to her father. In the final official information about her, she was living in a mental hospital during WW2. Tragically, this was also the fate of Arthur, her older brother.

This week through wild card searches on the web I discovered that the first girl born in the family had died in a freak accident before her first birthday, being smothered by her own bedclothes. The youngest two daughters died age 2 and 3 after the widowed father returned to the E. End of London immediately after Jenny's death.

Jenny died of consumption aged 38. Her sister, my great grandma had nursed her. I have her death certificate, which had been kept safely with all our family papers. I remember my dad telling me that Jenny and my great grandmother were very close. Their older brother and sister were lost to illness, a burden that many Victorian families bore due to devastating and deadly childhood diseases. My great grandma had lost her firstborn twins and my grandfather was her only child. Then she lost her sister. To my knowledge and my dad's knowledge she never saw her nephews and nieces again. I doubt she knew that the children suffered terribly as their father had a breakdown and turned to drink after his wife's death. So that left me trying to trace Charles. He was last mentioned during World War 2 as a bus conductor and his wife was working making radios for the war effort. I think I found a record of their daughter, and her three sons, who are are of my generation. But here the road stops. There are no more signposts, just lots of dead ends.

This branch of my family has caused many tears for me - a sense of loss, and grieving for lives that were so hard. Arthur and his sister lived to ripe old age, but we didn't know that. If my father had known, he would have visited them. Family was family. If my great grandmother had known the fate of her nephews and nieces, I think she would have tried to adopt them. She only had one child and she and my great grandfather were modestly prosperous. It could have ended very differently. I just hope the grandchildren and great grandchildren of Charles will somehow carry some of the love and grace of their ancestor Jenny. 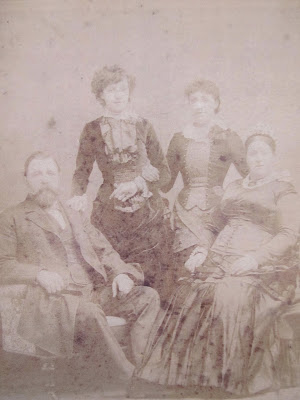