The kindness of neighbours and strangers

Our neighbour messaged me last night on her way home from work "Would you like some pears and chestnuts?" Wow! This is the same neighbour who has gifted us pumpkins and dessert grapes from their garden. This evening's offerings were one step removed however. She had been given rather a lot of both by a customer and had divided the bounty. Generosity a step removed. Thank you whoever you are who grows and shells perfect chestnuts.

Chestnuts appear in some of my earliest memories: of St Helen's Square in York, where in the 1960s vendors could be seen selling from braziers. It was an early autumn treat to go into town and consume them from a cone of brown paper. Later, on bonfire night they would be the treats to eat whilst watching rockets and Catherine wheels explode and make you dizzy.

Memories of my years living in Austria roasting them in our apartment oven. The horse chestnut variety were an excuse to take a walk in the Vienna woods, to kick away the leaves and collect a basketful to dry and make into decorations.

Later, in a park in northern Athens, I collected a handful and took them back to my desert home, vowing one day to live in a cooler climate where chestnut trees would be the norm.....and here I am and here they are. 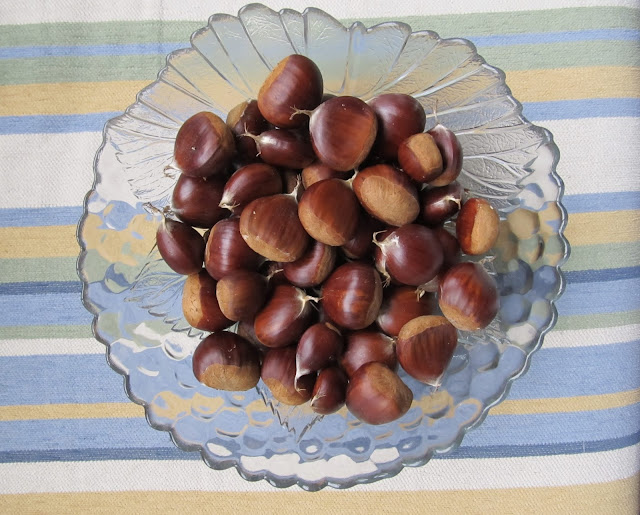