Another delightful neighbour dropped me a note this afternoon - would I like some apples and feijoas?

I thanked her immediately, and said "yes please" to the apples, but a "sends regrets" for the feijoas. My excuse, well, they are an acquired taste to someone who wasn't brought up in these islands. My sour fruit of choice is a fat Yorkshire gooseberry.

My grandmother made gooseberry pies all the time, due to a somewhat mutant bush near the orchard which gave a gargantuan harvest for most of the year, which I'm sure it wasn't supposed to do. Or perhaps it was that she stored them somewhere cold to make the season last. She didn't have a fridge or a freezer, so my bet was on the coal house, as it was freezing in there and doubled as a hell coloured food store.

There was a downside to the pies however. They were fine, fresh from the oven, but grandma's pastry was like formica after 24 hours and then like flooded carpet tiles thereafter. Delia Smith was a full 25 years away! But the smell of a cooked gooseberry is enough to make me want to sit in a corner, close my eyes, hug my knees and remember the kitchen coal range, the enamel pie tins and the gelatinous custard that the pie island would float on.

My grandma's brother was a member of the local horticultural society for 54 years. I have the engraved pewter tankard to prove it. His rhubarb and gooseberries won many a prize and heart. Here is a photo of me, about age 11 holding a bunch of the stuff, worthy of a royal wedding bouquet. 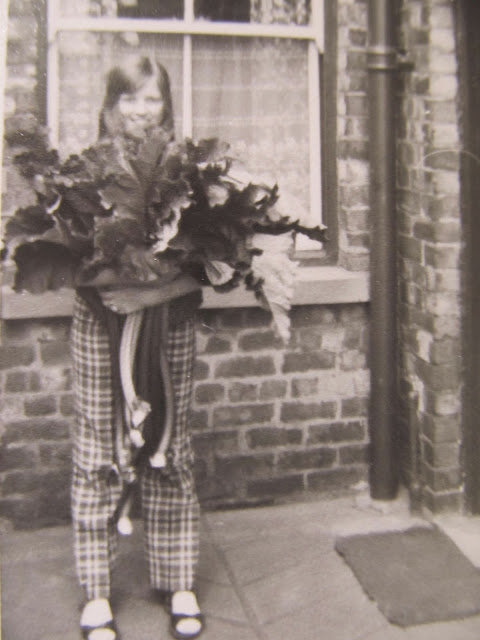 I guess I would say "I will TRAVEL for rhubarb" and if Meghan Markle would like an inexpensive floral adornment, I can recommend Uncle Laurence's rhubarb patch to source it.
Posted by Jane at 18:47