We have really lovely neighbours all around us. We don't see them often, and because most of them are running small farms, we tend only to communicate by phone or email or Facebook. We were recently invited for drinks and nibbles by the couple whose rather decorative Highland coos keep our paddock neat. The couple have a daughter who lives on the same property in a small house which we can see over the fields from our windows. She and her partner rescue all sorts of animals when they aren't working hard at a business in town.

This evening when I went to empty our kitchen bin, I was met by a perplexed tabby escorting a very chubby hedgehog across our front driveway. I'd seen this particular pincushion before and tucked him up under some branches and leaves well out of the way of our cars, but he is a persistent pin cushion and keeps returning to the vicinity of the garage and wheelie bin. I caught him and then realised he was starting with mange, a common hedgehog problem. I felt like I was offering a St John's ambulance service to him. I whisked him up the driveway, flanked by concerned tabby and show off ginger who kept running up trees on our neighbours long avenue.

My neighbours had just come home from work, and were relaxing watching TV with a chicken perched on the sofa behind their heads. They were surprised to see me clutching a ball of anxious prickles, but were quite happy to take him in and treat him. No doubt he will be released soon, sans mange and be trying to dodge the cars again on our driveway. Here he is, in all his spiky splendour. 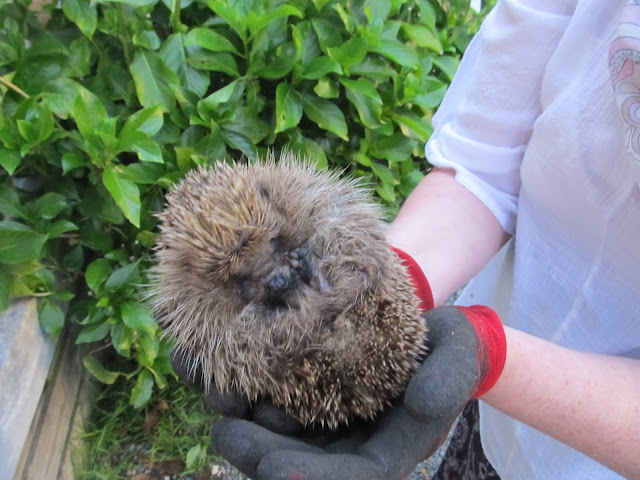