A Party Political Broadcast on behalf of all National Health Services

Yesterday I had a prolonged AF incident. Kind of like a pidgeon and a sparrow were playing soccer inside my rib cage. By the time I got to bed I knew it was likely to be long night. I slept for a few hours, woke up to go to the bathroom and almost collapsed in the ensuite. St John's ambulance took me "under lights" to Palmerston North hospital. It's a 50 minute drive. The driver warned it would be a bumpy one. It usually is, because there is a stretch of road, about 5kms, where the potholes and skewed camber make it treacherous. So I was strapped in, and we made it in just under 45 minutes. The road was almost deserted and he told me he drove down the middle on the pothole stretch, to spare me some of the bumps. I got home at 8am, after a series of tests. Turns out I have a UTI which likely triggered the AF. I now have antibiotics and have just managed to swallow my usual medication even though I am really nauseous.

I am not writing this because I want sympathy, it is because I am VERY grateful for a Public Health Service, highly competent paramedics and doctors and access to pharmaceuticals. Whether we live in NZ or the UK or somewhere else with a government health service, we must support it and fight to keep it. It is more precious than gold.

On a lighter note. When you call for an ambulance in NZ one of the things they request, before the ambulance arrives, is that you put away any animals. I am guessing this is a polite way of saying "please put away your angry/bolshy/man-eating dog so that we can access the patient. Boa constrictors and pythons should also be stowed carefully." The first time I called on St John's services, I fretted about finding the cats and making sure they weren't on the driveway when the ambulance arrived. I needn't have worried of course; Ruppin lives permanently under the house/various bushes and Cumin runs when she hears any vehicle on our driveway. But then there is Mango who genuinely believes the world is his friend, his access to tickles under the chin and he believes in generous distribution of Bon Homie. He was the one the ambulance driver nearly fell over when he came into the bedroom and who my husband had to remove before he climbed in their emergency bag.

I got home at 8am and I woke up just before lunchtime. No sign of cats. But as I passed the spare front bedroom, I saw this 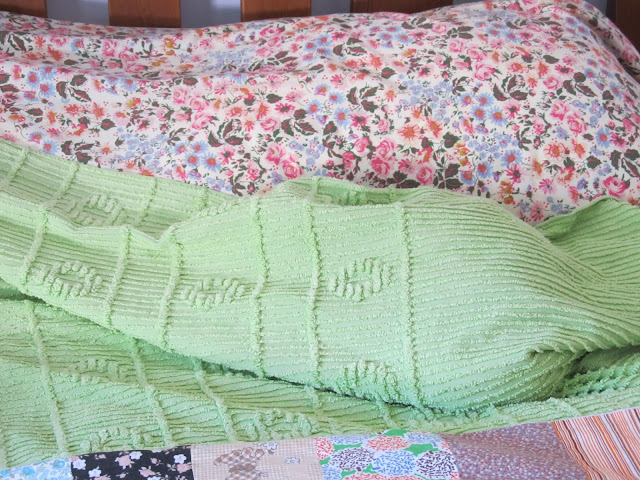 It seems the drama of last night passed her by. I called her name, and this is as far as we got 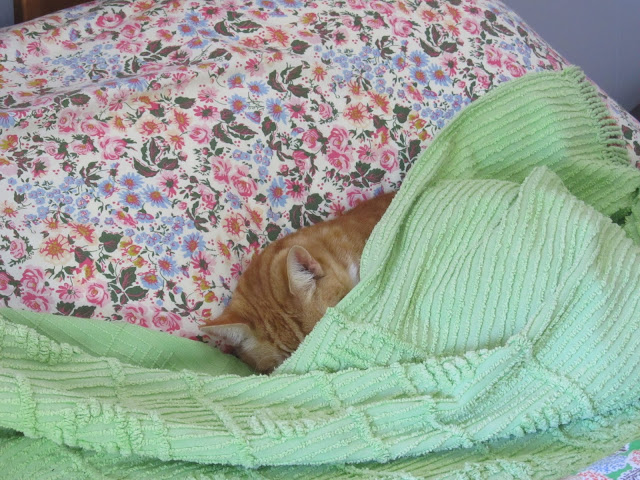 Way too much excitement for one occupant of Coneysthorpe.
Posted by Jane at 16:04