Knoedel and remembrance of dumplings past

I have been making use of the local library for family history research this week. They have a free edition of Ancestry, so I have been able to fill in one or two mysterious gaps in the family tree. I was reflecting on the memories this research has flickered into focus. Not so much about people, but about the times they lived in - enviably a time which was much simpler than the age we now live in, but so much more labour intensive, especially housework and cooking.

When I was a child my mother made very simple food for my dad and I. She grew up during the Depression and had survived WWII in the Armed forces and the rationing which followed the War. So she could make something modest go a long way. Meals were usually vegetables from our garden and some inexpensive cut of meat. My favourite weekend meal was mince with dumplings. As a student I didn't eat meat, then later it just felt gluttonous to make meat and dumplings for one, so its delicious simplicity faded like a WI cookbook.

Tonight I made a big pot of chicken soup, as my better half and I have throat infections and the malaise that comes with a body not up to much. In a fit of nostalgia, I roamed the internet for a dumpling recipe. The result was amazing. The photo is of the dumplings, mid-dry fry. Mum never put them directly in the mince but caramelised them first, got them to puff and crisp up, then put them to hover on top of the meaty gravy.

The recipe couldn't be more simple: 2 cups of flour, 4 teaspoons Baking Powder, 1 cup of milk, 1/4 tsp salt and 4 tablespoons of butter. Shape the dough into rough balls (I made mine quite large), then I put them to dry-fry in the pan. You can add dried parsley to the dough if you like. 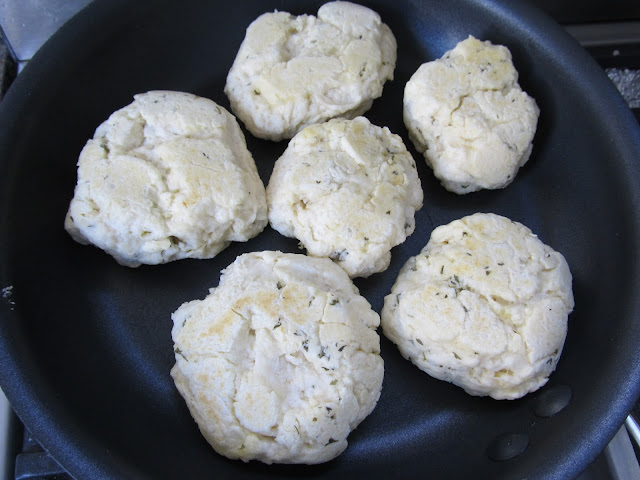 These dumplings also had me wandering back to times in the Czech Republic and Austria and the freezing winter evenings where starch, and lots of it, was the only way to keep warm. Where the evening meal resembled that which would have graced the trencher of a magistrate or government inspector straight out of Gogol or Chekov. Not for them a dainty bowl of mince, but a slab of pig and jug of ale.

The Dumpling - a gateway to memory.