Yesterday we had a roaring fire going for most of the day in the kitchen/living room. The temperature had dropped by 10 degrees on the previous day and rain precluded washing the bedding - or at least that is what I thought. Then a roll of memories from my childhood unravelled before me. Mum used to have a wooden clothes airer she would park in front of the baxi fire and items would dry quickly to biscuit texture. So yesterday the bedding got washed and draped on an airer in front of the wood burner. I did wonder if it would make sleeping between the sheets later a bit like being in a log cabin, but there was no trace of "eau de macrocarpa pine".
I reflected later on the layout and size of our current home to the 1957 semi detached bungalow where I grew up. One side of this house is the size of my two bedroom childhood home, and the three of us ate meals in a kitchen area which is comparable to my current kitchen, but without a table squeezed in it at one end.
My parents bought their house from new at the beginning of their marriage. It was a lovely place, on a corner plot, so that dad could have three lawns and plenty of rose bushes. He added beautifully made stone walls and a conservatory type extension on the front, so that mum could have a sewing room. I remember thinking that sewing room was huge to play in, but the available space to extend the bungalow was very limited, and in reality there was only enough room for mum's sewing table (made for her by my dad) and a few other items, like my toy box. Dad's radiogram backed on to the sewing room wall, so it was possible to listen to "children's hour" with mum sewing and me sitting on the Lino floor with my spirograph or writing books. 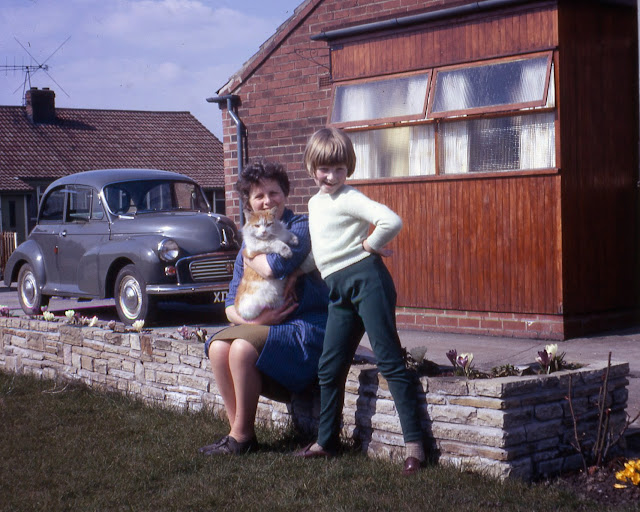 I wonder what household chores will bring back the next tide of remembrances?
Posted by Jane at 15:18