I follow a trader on a local online auction site who sells vintage books (now there's a surprise). This morning I was sent a link to a book which immediately threw my senses back almost half a century. It was a small book to teach French to young people.

I remember clearly my first week at secondary school seeing on my timetable the word "French" followed by "Language labs." I was beside myself with excitement that first week, putting on headphones and learning how to say "Breakfast is ready." Useful stuff! I still recall the smells and sounds of thirty eleven year olds rewinding the practice tapes and repeating over and over "Je m'appelle....." We were all given a French name; mine was Claudette. I was disappointed, I so wanted to be called Marie-Noelle or Romilly or something a bit more romantic. Claudette sounded to me like she would be a scullery maid with bad knees.

For three years I continued to learn French three periods a week and still recall that excitement of donning huge plastic headphones and imitating the accent of our French assistant Madamoiselle Rumney.

I discovered quickly that language learning wasn't my strong point, and unlike many of my school friends I didn't go to France on holiday each summer so had no opportunity to practice. I found grammar perplexing and difficult. I swopped to learning Spanish (supposedly easier). I learned that for 5 years - or at least I tried to. Then there was the language assistant challenge in my final 2 years of Spanish -  we didn't have one. There were only two of us left studying it by that point and the other girl was very talented. She danced flamenco in Spanish. I dragged my language skills behind me like a satchel with a broken strap. The lack of a language assistant meant that every Wednesday after school we caught a bus to the next city to meet up with a Spanish assistant from another school. We sat in the bus station cafe and spoke to her in Spanish, or at least my friend did. I just coughed - Maria chain smoked Gitanes cigarettes.

Not willing to admit my inadequacy at linguistics I went on to have embarrassing and inaccurate conversations in Afrikaans (lived in S. Africa), German (lived in Austria), and Arabic (lived in the Middle East).

But here's the thing - I understood conversations in every country I have ever lived in. I pick up vocabulary quickly and can usually get the general drift of a conversation. I even did it this in Hebrew after a few weeks. But the moment I open my mouth, my memory cells paralyse, my teeth glue together and grammar tumbles like a badly constructed scaffold outside a dodgy building. I'm wondering if there isn't a name for this kind of handicap? But this morning when I opened my email, I felt like that 11 year old again and wanted to repeat to myself "Le petit dejeuner et pret."

Our songster decided to have a rest next to the thyme. 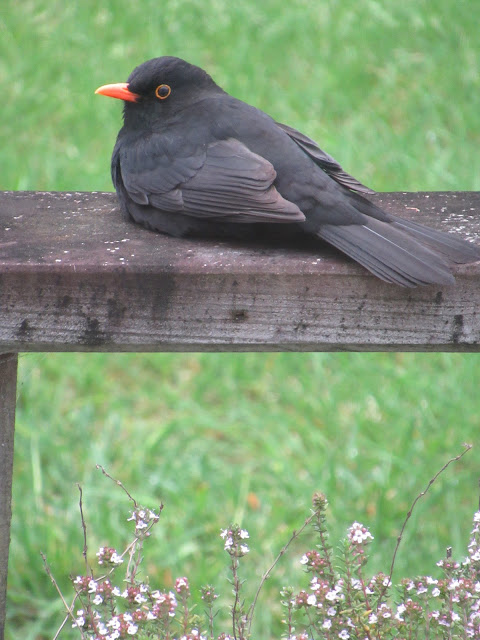 Coming from wet and cold Yorkshire, I would never have imagined that I would have a surfeit of lemons in the middle of winter. I read Carol Drinkwater's book entitled "Driving over lemons" many years ago, and envied her the challenge of using so much citrus fruit from her trees.

Our tree went berserk this year, despite being planted in the wrong place. It's the excess rain - they love being rained on. So here I am, wondering what to do with them all.  They are ugly, in a way that only their mother could love, but delicious and juicy.

There are only so many lemon drizzle cakes you can make.........or perhaps not. 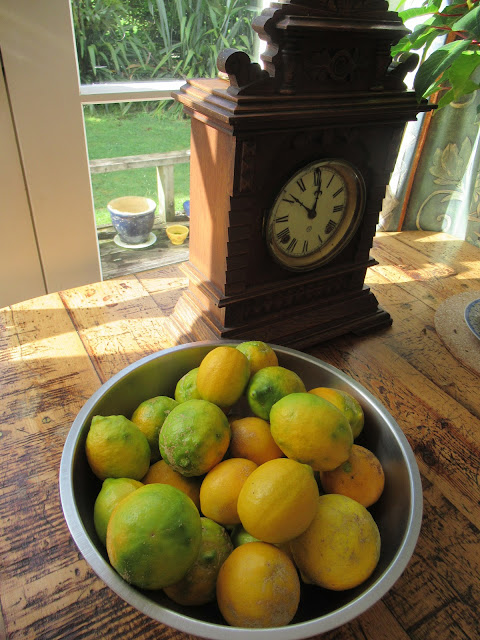 I inherited a lot of family postcards from the Edwardian era, which were largely correspondence between my grandmother and her sisters and brothers. As is often the case, there were a number of mystery cards, either because I had no context for them, or because I simply didn't know enough about my grandma's life at that time. Also, the mystery cards could have come from my grandmother, her siblings, my great grandmother or my great Uncle, as all their effects ended up with my father and later with me.

Tonight, courtesy of a WW1 website called "A Street Near You" I was able to finally put a history to a photo.

This postcard said simply "Arthur" and on the reverse "Remembrance" and the date he died, a month before the end of the War.

Arthur was a similar age to my grandmother's eldest brother Bill. They would have grown up together in the village.  Both worked as gardeners on large estates, Bill in Canada, and Arthur for Stapleton Park, whose grounds and gardens were designed by Capability Brown. Bill signed up to go to France with the Canadian Regiment, but was never deployed, Arthur joined the Durham Light Infantry as a Lance Corporal and died in France.

I cannot imagine the devastation caused by his death in such a small village. Three young men were lost from the tightly knit community. A hundred years later on I find it so sad as I look at this young man with so much promise.

Forever with the Lord 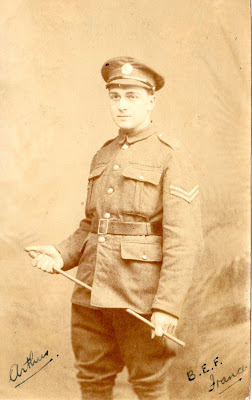 Grief caught me today, as I watched a coffin draped with a Standard.

My own father's coffin was draped with his Squadron's standard and his service medals. He wasn't a Duke, or a Lord, but he was a father.
And today a father was mourned, by his children who walked. No matter the titles and wealth and position and the history of millennia. They were fighting back tears as children do when they know they will not hear that voice again, hear that laugh.
So grief grips us by the hand and we walk, so reluctant, wanting to run back in time.
Grief is an eternal companion, sometimes with the iron grip of memory, other times just a sad reflection in an old mirror looking behind.
But we walk and we walk on.
Posted by Jane at 19:02 No comments:

Waiting for the rain.

The air this evening smells like Africa before a storm; that high tension state when the grass almost speaks to the cloud heavy sky and begs for rain. The grass is very, very dry, baked hard with no possibility for birds to feed. We have fire warnings in place, and we wait for the sky to crack. The smell will change first then the colour, then the light will sharpen and refocus through the haze. I wait for the moment. But I will miss the smell. The Smell that invites animals to scratch in the shadows, pause and listen, then scatter. I wait for the scattering at the first boom, the first hammer and flash. Then the metal roof will timpani and throw the drops to dance and white water will gutter in gutters and overflow and crash. Yes, tonight feels like the veld.

On the trail of the lonesome agapanthus 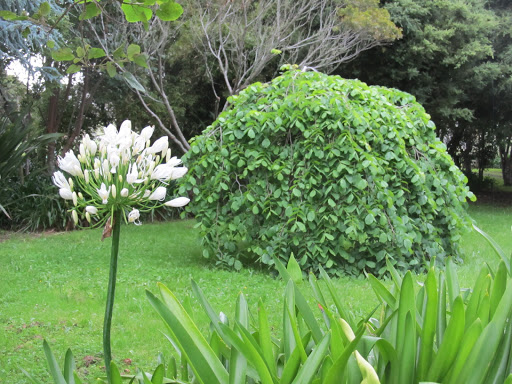 This is our first agapanthus of the season.  The weeping elm has grown into a massive bush and the rest of the garden is exploding. I wish we were brave enough to keep a goat, but with a vineyard next door, and the endless ways they find to escape, I'm not sure my nerves would be able to cope.
Posted by Jane at 05:24 No comments: