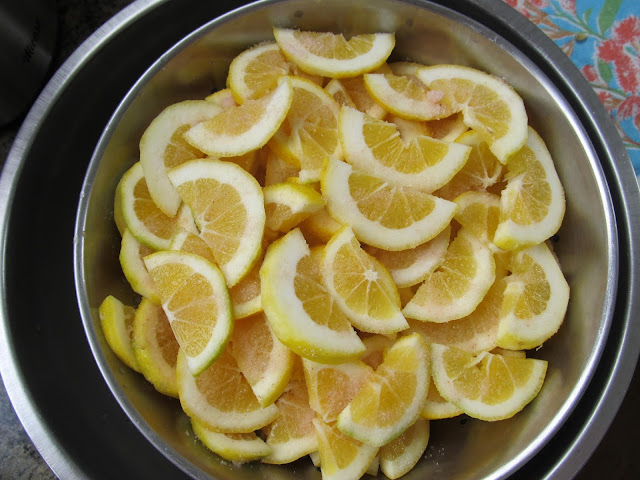 Due to double the annual August rainfall last month, our lemon tree has done rather well. The tree doesn't get sprayed, or in fact get any attention, so the lemons are gnarly and need to have some of the outer skin scraped. But apart from that they are juicy and delicious. I decided to pickle mine, as they are fabulous in summer salads or cooked with rice.

I suppose you could say I've been nudged a bit this year, to do more in the way of homesteading. Part of the nudge has come from the amazing book by Julie Summers "Jambusters" about the role of the Women's Institute in feeding Britain during WWII. Not only did they produce potatoes, root vegetables, tree fruit and soft fruit by the 1000's of hundredweight, but they were also responsible for organising, caring for feeding and housing the majority of evacuees during the worst periods of the conflict.

A small fact from the book. After the 1940 fruit harvest, the nation's Women's institute made over 1000 tonnes of jam = 1 million kilograms or 4 million half pound jars.

I thoroughly recommend the book. It is compelling to read about the War through the eyes of the hungry Home Front.
Posted by Jane at 17:35