A clock in the kitchen

My grandparents lived in a late Victorian house in a village outside York. Inside it retained all the features of the house that was initially rented by my great grandparents, then purchased by my grandfather in 1928. Most of the contents were Victorian and inherited from the farm which my great grandparents had farmed at the end of the 19th century. It was difficult to know what was "new" to my grandparents through wedding presents or later acquisition and what were actually heirloom/hand me downs.

When my father had to clear his childhood home after my grandmother's death, much of the furniture went to an auction house, because it was too huge to fit into my parent's 1930s semi. Most of the pictures and ornaments were sold through a local antique shop with a handful of items retained for their sentimental value. It was these things I had to somehow juggle when it came to disposing of items before the sale of our family home last month.

The one non-negotiable was the kitchen clock. It is an 1892 Ansonia and a ticket on the inside of the casement showed that it had last been serviced in 1963. It sat on the Welsh dresser in my grandma's kitchen and was the background chime of my childhood, through Sunday afternoon teas, sleepy childhood naps, podding peas at the kitchen table and counting grandpa's pennies in his shop cash register (an old toffee tin!)

Last month, when I left the UK with it very carefully wrapped in my suitcase, it was still working happily. So much so, that the "gong" hammer had to be muted with a small sock, lest my luggage started to chime on the hour and half hour at 30,000 feet. I had no idea if it would survive the trip, but reasoned even if it didn't work on arrival, at least I could have its staid if silent company on the end of our kitchen table.

It arrived in one piece, but had the indignity of a few screws rattling lose which attached the movement to the wooden casement. This meant the clock hands were pulled tight against the clock face due to the weight of the brass innards of the clock. What to do? The local clockmaker of repute had retired (in his 80s) and wasn't to be persuaded out of it.

Thankfully, another clockmaker was found over an hours drive away. He happened to be passing our end of the mountain range last week and made a house call. The clock was packed up and taken to his sanatorium for dicky tickers.

Today was the home coming. This clock has travelled further than my grandparents would have ever dreamed and is happily ticking away in our Victorian villa in the foothills of a mountain range, a long way from Connecticut where it was made and Yorkshire where it kept time for over 100 years through African and World Wars!

And for me, it is a link with my family, with my dad who I still miss daily, and having it with us it imparts something of him, his childhood, teenage years and adulthood in the heart of our home. 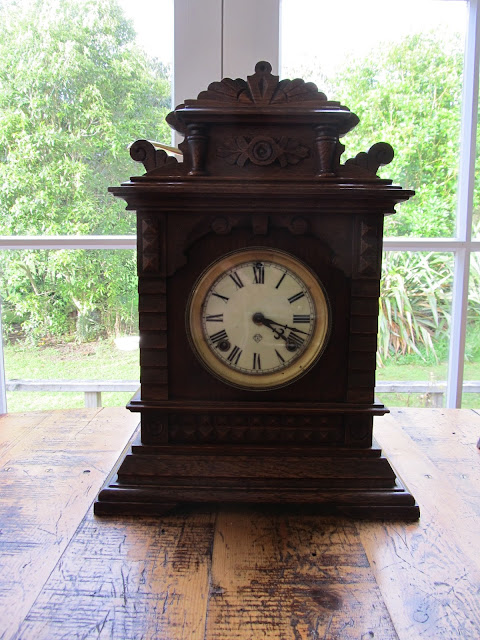